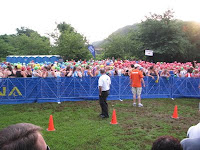 I have to admit that this year I was a lot less apprehensive about this Philadelphia triathlon event but at the same time, quite ambivalent about it. As the date approached I really didn’t feel like doing it. I’ve worked out very hard all summer and I knew that I was in good enough shape to do it but I didn’t feel like getting worked up….and that’s what always happens before competitions. I get major butterflies and my stomach is a mess and I worry worry worry that something will go wrong. 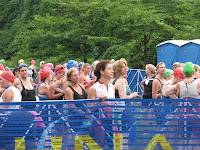 But crossing the finish line is such an incredible feeling that the struggle is always justified.  The “why?” that I said to myself as I started the run, pretty exhausted, just faded away as I accepted my medal and slowed to a stop at the finish.

The swim: The Schuylkill River is a city river. Its primary use is by rowers. My mother is a rower. Rowers get in these skinny skinny boats called sculls and go backwards! If you've never seen it done check it out, it’s an amazingly challenging sport. In any case no one actually swims in this river and I don’t want to write about the kind of things found in there. (I’ll gross you out somewhere later in this retelling).  The water is pretty murky. You can’t see your arms as you go. You can’t see anything.  They put the competitors in the water in waves. It’s an incredibly comfortable way to start. Very dignified compared with that massive rush at the water’s edge I know from home. Approximately 60 people to a wave. You start treading water near an imaginary line between two orange floats. There is nothing to hold on to. Each wave has a different colored cap so as you swim along you know  you’re doing well when you've caught up to other colors. After all, they started a full 4 minutes earlier. Now in the USA I've noticed that while running is REALLY strong, swimming is not. There are amazing swimmers out there…and I saw them in action close up in my age group start, but there are many just trying to get through it. I actually passed people hanging out in the water, and some that were doing backstroke; tons doing breast. 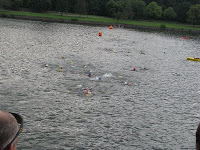 But it was in the water that I figured out exactly who I had to contend with. I was in a 48-54 age group start. And it was in the water that I learned a major lesson in Philadelphia. The toughest women out there are the 50+ group. In fact those were basically the only ones that passed me!! The 30 somethings were always on the side. I could take them easily…But those skinny, muscle-ly 50 somethings were fierce!!!! 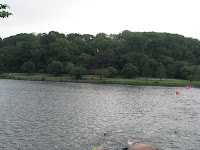 The swim started too fast. Some of those women just leaped out! I went with them and soon enough I found I couldn't breathe. That DOES NOT HAPPEN to me and I couldn't believe it. And frankly, with so many people in the water, not only from all those “wave starts” but also the lifesaving crew checking that no one is in trouble (someone died there last summer in a Triathlon),  it’s kind of freaky not to be able to breathe. I figured I must have pushed too hard. I calmed myself and slowed my pace.  Meanwhile the vapors off the surface of the water and that bit of water washing into my mouth with every breath were just foul. We are so spoiled in the Mediterranean!! I couldn't wait to finish. Now that is REALLY not like me. I love to swim. I wait for the swim. I never want it to end. I don’t want to do anything but swim. But here I was DYING to get out of the water. For me that set a weird tone for the whole race. I started thinking, if I’m really not enjoying this, what’s left? Next up I’d have to get on that darn bike! I might as well try to enjoy this! I focused. I swam strong. Nice long strokes to get through the current which was pretty strong. It was only 600 meters. They keep it short because the swim is what keeps people from participating; the more the merrier for women’s events. I reached the end of the murky water and here they pull you out because there is nothing to hang on to…I was hoisted up and off I went. 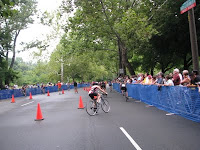 The bike: The bike section was really long: 25 km. Of course, that doesn’t compare with Eilat which I thought would never end. I kept that in mind!! But this course is hilly. It includes a challenging bridge up to the Strawberry Mansion area and then a climb through the mansion area. Of course all that climbing is rewarded buy some pretty fun down hills! Anyway, this was the opportunity I’d been waiting for to use my new technique. I climbed those hills standing like a 14 year old thanks to my Coach! Thanks Nir! I was still a bit wobbly (practice makes perfect), and I’m never going to be great at it because my balance simply isn’t terrific (I blame it on poor eyesight) but I knew he would be very proud of me. The course is two loops and after the first loop you can really anticipate those hills. Unlike most races, I also pushed through the down hills. As I mentioned before, I usually did the passing. I felt good. I felt strong. There were two categories of those passing me. One was those riding absolutely amazing bicycles. While I’m happy to have my mom’s old Cannondale, a mid 90s relic with three plates at the crank, it does not compare to the machines on the road. I actually thought an airplane was passing me at one point. Along came someone with those fancy wheels and a bullet (or sperm shaped) helmet. Scary!!! Anyway the second category was the 50+ group. As I mentioned above, I simply COULD NOT COMPETE with them. [Well, we’ll see next year!!!]. Phew!! 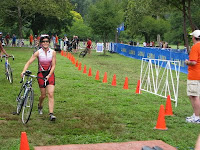 The course was littered with people with flat tires. It had poured the day before and also all night until about 5am! There were sticks and stones everywhere. I was incredibly careful. I really didn't feel like ending my race that way.  Plus I think this is where my hearty tires came in handy!!
On to the run: Again, “Why am I doing this?” Did I forget to mention that although the temperature was in the mid 70s, very comfortable, the humidity was 95 percent? All of my body parts were simply stuck together. GROSS! The good thing was that there was a cloud cover the entire race. NO SUN! How different races are without that sun beating down!!! The run is a straight shot out to the Art Museum and back.  It’s relatively flat but it is never ending. I started out comfortably and said, “Okay. I have to make a decision here…have a dull run like Herzliya and be disappointed in myself or actually go for it.” I started to quicken my pace just a bit. For the record, I was DEAD TIRED. I kept a close eye on my heart beat and decided on a target number. The woman who completed the bike section and moved on to the run was a great runner. She jumped out ahead of me and I decided that I was going to stick with her. AND I DID! I had her in sight the entire way. She had a beautiful runner’s gait. I was so envious.  But I kept her in sight during the whole run and unbelievably, 500 meters from the finish, I realized that I actually could go a bit faster. I passed her!! And without sprinting!! (I learned a painful lesson about sprinting at the finish of the Tel Aviv Night race of 2009). 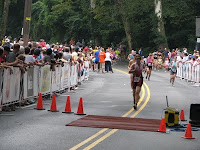 Finish line 2011: I did it! It was over. And yes, I knew, right there, that I’d do it again next year. Lessons of the day: 1. I’m strong--very strong. Thanks to Nir for torturing me several times a week. 2. It’s a lot more fun to do this with my friends. I was pretty lonely before and during the race. Not only did I not know anyone on the trail but no one cheered me from the sides except the race officials who were actually GREAT and numerous. 3. Rami deserves major thanks. Not only for waking up at 5am but also for cheering me at every opportunity. Next time he promises to memorize my swim cap color so that he knows when to expect me from the water! With 1700 participants (there was a TRI and a Duathlon) it was crowded and difficult to figure out who was who as we emerged from the water. 4. Women 50+ should not be messed with. They are tough as nails. 5. I love doing this despite the butterflies. 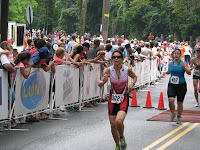