Triathlon Eilat 2011 or "Gone with the Wind"

Being both a competitor and a mother isn't easy. The days prior to the annual competition in Eilat were filled with making sure that everything was ready for my boys: their bikes, gear, their emotional state-of-mind! I wanted things to go as smoothly as possible. Yes, I prepared my own things, made sure to drink water, thought a bit about the race; but that was secondary. Rami and I packed the car. Three bikes, three kids. A full load. So thankful he was driving. He's convinced his presence on these trips is superfluous. If he only knew! Couldn't do it without that other calm adult in my corner! The whole trip down south was occupied by the thought of whether or not we'd get there in time for the boys' practice, not mine. It's impossible to disconnect from being a mom.

Thursday late afternoon, all is set. Daniel calls in tears. He has brought two left shoes with him. He won't be able to wear his favorite competition shoes. I breathe a sigh of relief. When I heard his cracked voice I thought something had happened to him. It was okay. It's just equipment. And everyone knows that equipment doesn't make the athlete! Or at least, that's what we tell ourselves! 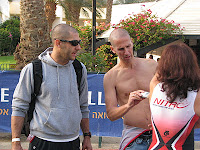 Thursday night, Daniel fills up his tire: poof! The valve breaks. He's a mess. This is an important competition for him and he's very tense. We change the tire. Or rather, his big brother Noah does it. Noah is relaxed this time around. It's his seventh time in Eilat. These boys are "old hat" at this business. I decide not to touch my tires. If they were good enough a few days earlier at my Tuesday morning practice, they were good enough for another 20km.

Friday morning. I wake up the boys and send them off. I have a few minutes on my own. Nice. Quiet. I go down to check in at the bike station. Laugh with my friends. I have plenty of time and it's not even cold! What a break! 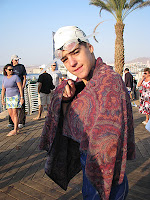 Over to the beach. Daniel has gotten out of the water. I wrap him up. I wouldn't dare get into the water. Brrrrrrrrrrrr. I don't see Noah at all. In fact I NEVER saw him except for the one split second when he emerged from his swim. After years of watching my boys' entire races, cheering them on, having butterflies in my stomach over their competitions, all I got was one split second.

Daniel's first. Great start out of the water. I breathe a sigh of relief…Noah out of the water. Great…I’m next. Black out. To the water's edge and jump. Don't remember too much about the swim except being focused on finding the exit. Last year I targeted between Melech Shlomo and Royal Beach, leading a whole group of women astray! I wasn't going to let that happen again. I did notice that the water wasn't as cold as I'd expected and that was a GREAT thing. The swim was fine. I love swimming. I reminded myself that as I pushed forward. I saved a bit of energy with my legs. Thinking about what lay ahead. Out of the water…heard Ziv and Udi cheer me on as I headed up the path. I smiled.

On to the bike. I climbed the hill out of the station. I heard the names of friends of Daniel finishing. Where was he? He'd had such a great start. He must have already finished. Okay, focus!!! The bike. The wind. The fact is that I was so relieved that they'd cut back to 20km from the 26km we did last year that it just didn't matter. It was a little tense on the course. I tried not to let too many people pass me. I fought. I pushed myself. I looked for Noah. No sign of him so I assumed he'd been in that pelaton speeding down the hill on my way in. I smiled as I saw Guy and Shai coming the other way. Great company! And then: there was Arella! And then the turnaround. I breathed a sigh of relief. I was almost home! Time to fly. Gears didn't work at the bottom range. SHOOT!!! I stayed somewhere in the middle of the higher range and took the opportunity to fuel up on water. I'm going fast enough. It will be okay. Flew over the speed bump by the entrance to Eilat! Oh no! Landed. Phew! Headed back into town. Menachem was there alone on the side of the road, cheering me on! There is no way to explain JUST HOW IMPORTANT that encouragement is! Just when you're ready to throw in the towel…Go Caroline!!! It's like taking a sip of an energy drink!!!

I pulled into the station. On to the run. Made that one turn in front of the stands and felt as though someone had put up a wall. The wind was stiff in my face. I couldn't believe it. Hadn't I done enough? What was this? I felt broken but knew that I had to finish. I also knew that I had a good position because I hadn't seen too many women ahead of me. It was going well. I wasn't going to give up now.

NITRO-ites were all over that first corner. How wonderful was that! But I really wanted one of them to jump in and just do it for me! The run was difficult.  It wasn't as hot as I'd expected but my pace wasn't where I wanted it to be. I should be faster.  Guy was already coming back. LUCKY Guy! I wanted to be in his shoes. Okay, I'd wait for the turnaround. The wind was wild, sometimes in my face, sometimes coming from the side. When I spit I had absolutely no idea where it was going to hit! 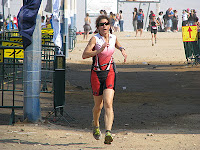 I approached the turn and saw Shai!! Yeah!!! Shai! I continued on. I had cramping pain throughout my ribs. My torso was so tight. Forget aerobic fitness, leg muscles. None of that mattered. How was I going to move through the pain coursing through my ribcage? And then: There was Tal. Come on Tal. Pass me! Tal runs like the wind. The next section of the run I simply waited for her to overtake me. Jennifer. Zebale. Miki. We're all here. We're all together. Finally, Tal passed me on the left. That was good. Now I knew I was almost finished. Back at the Nitro corner. Nir. Tsaf. So many others! I took water, but drinking at this point made me nauseous. COME ON Caroline: 500 meters!

I didn't know what the heck was going on between my ribs. Nir tells me there are muscles  and tendons there…never really knew they existed until Friday morning and I could have lived without that knowledge. I came down that stretch looking forward and back. Last year I was elbowed out by a woman my age, one elbow separated our places. I wasn't going to let that happen again! No one around. I was alone. Turned the corner, Rami yelling to me: GO! Crossed the line. Shai welcomed me….the ribs…unbearable! I pulled it together. Shai stayed with me. I'd done it….and yes, I knew I'd done well and that maybe, just maybe, while tipping the top of the age category at an ancient 49, I might just have made podium!

It was great. And worth it. WHAT A FEELING! Daniel met me on the other side of the stands. He'd had a cramp. His race, which had started out so well, had ended badly…Not badly in terms of the whole age group, but badly for him personally; a real disappointment. He cried on my shoulder. How painful was that. I forgot about my ribs. Rami came over. I asked about Noah. He'd had the race of his life, finishing far ahead of his expectations. What a mixture of results and emotions. 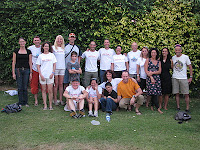 I walked Daniel back to the hotel, hearing him tell me how again, like at Emek HaYarden, his leg had cramped so badly that he'd had to stop and work it out. When you hope to be on top you can't take those extra two minutes…I passed some of my friends from the Sprint, Arella, Jennifer, Zebale. What could I have done without them? Doing the Sherox Triathlon alone during the summer didn't compare. I was surrounded by support: My husband, my children, my teammates, my coaches, my friends. How lucky was I?

Later on I checked the results: WOW! I'd showed those youngsters something!!! Just wait until next year!!!
I'll be back!
Posted by Caroline Goldberg Igra at 11:40 AM