The Expense of Brevity

Somewhere along the way, the seemingly irreplaceable act of writing has become virtually extinct. Picking up a pen to jot something down happens less and less, replaced by groping around for the cell phone to record something one's desperate not to forget or composing on the computer. One of the last remaining vestiges of my former romance with pen and paper is the weekly grocery list I prepare for my husband—and its execution is seriously hindered by the fact that it takes ages to rummage up something that actually writes! It's not as if I don’t have these valuable staples in the house, but their infrequent usage leaves them inaccessible exactly when I need them. 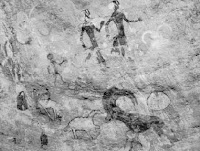 More worrisome than the disappearance of the writing instruments which have been such a significant part of our lives since the cavemen scrawled away on their walls with sharp stones, is the vanishing skill of writing well. Our ability to express ourselves on the printed page is fading away. Struggling against its most serious contender, the short-cut style of writing developed for text messaging and chatting online, the art of good writing has been swallowed up whole. Where are those commas, periods and capitals? Since when has it been acceptable to consistently drop vowels? At what point did that saucy verb replace the formerly omnipotent subject? Facebook chatter, obviously executed while seated in a chair, is ironically one hundred percent action! Politesse, adjectives acceptable to prime time, and grammatical precision, have gone the way of the wind.
How paradoxical that literary theorist Stanley Fish has just published a book titled How to Write a Sentence (Harper Collins) critiquing the brevity in writing encouraged by Strunk and White's famous Elements of Style (1918). Fish's premise is that there is actually plenty of room for prose that runs on and on, sentences that meander before coming to completion and descriptions that seemingly veer off course before sliding their way back on to the tracks. But this alternative to that noted in the Elements of Style isn't even an issue for today's youth. Alternatively, the "bullet" style of writing most utilized by anyone under eighteen, and definitely encouraged by Facebook status updates and cell phone texting, makes even Strunk and White's recommendations seem long-winded. 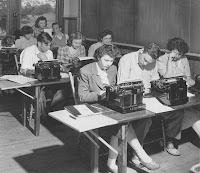 How much of our control of the English language has fallen by the wayside merely by introducing a keyboard with a memory? I am certain that a serious study would reveal a clear connection between the move to composing only on the keyboard and the disintegration of writing skills. That being said, I personally don't want to lambast the word processor because it effectively saved my life. Being one of only two students in the sixth grade whose cursive writing was considered "seriously below par", I benefited most when we were introduced to typewriting the following year. Seated at my own little desk with its own little typewriter, fingers gently placed on the keys with the “g” and “h” left open to stare up at me, thumbs draped along the space bar, I felt as empowered as a concert pianist. Conquering first letters, words, sentences and eventually full texts--the world was our printed oyster.  Nostalgia for the exciting, trigger-like recoil of these early, clickety keys will forever make me a fan of the QWERTY keyboards found on Blackberry-style phones.

The development of the personal computer in the late 1970s made it that much easier to compose and edit lengthy texts. Being a draft writer I had spent much of high school and college retyping entire assignments--over and over. Although I was fortunate enough to work on a particularly fancy Brother typewriter that stamped a letter in white ink right on top of the black one I'd typed by mistake, this new invention changed my life. Its wondrous ability to process words and retain them, essentially cutting my work process in half, was revealed to me at the Brown University Computer center while writing my senior thesis. After conquering that cumbersome roll of perforated paper that sometimes stretched blocks long, I never looked back.
Living in a house with too many computers to count, my children are amazed at the fact that I made it through college without a personal computer. How could I have grown up without this example of modern ingenuity at my beck and command? I counter their incredulity with my own at the way that, albeit making our lives “oh so much easier” in so many ways, the computer has destroyed our ability to write. That might sound like a major generalization, but it's meant to. Computer word processing and personal electronic managers have seriously altered our ability to execute even the simplest task, i.e. compose a sentence.

As an art history professor here in Israel I was stunned to find research papers composed primarily of texts patched together from outside sources. My students had used that handy "cut and paste" technique that some say counts as writing. As in most cases they hadn't bothered to match the grammar of the source text to their own, this was easily detected. This experience in higher academia served me in good stead when I discovered that my own children were doing the very same thing. To add insult to injury, it was obvious that they weren’t even reading the texts they were pasting! When I verbalized my concern I was summarily informed that this is exactly what they had been instructed to do, that they weren’t actually supposed to learn about the given subject. Reading up on, say, the bombing of Hiroshima, was secondary to knowing how to find the information and re-present it within their own Word document; additional sentences were superfluous. The "cut and paste" technique, by curtailing the writing process, was actually curbing the absorption of material! Whereas that first computerized encyclopedia, Encarta, had offered baby boomers a wealth of material with which to enrich their own ideas, this generation simply took Wikipedia's authority for granted; add water and presto: assignment completed.
As a third generation academic trying to raise the fourth, the encouragement of short-cuts within the education system, spurred on by new technology which allows them to take someone else's sentences and claim them as their own, is frustrating. Where has the artistry in writing gone? Where is the search for that perfect word? I still remember my excitement at receiving a copy of Roget's Thesaurus for my 18th birthday. With all those words at my command I could conquer any task. I still struggle over the selection of each and every word, sifting through a wealth of language so that each choice reflects exactly what I want to say. The Synonym option in Word has made this search that much simpler and I could not live without it. It beautifully helps me to compensate for the weakened state of my present vocabulary, the victim of speaking two languages daily. Yet I’m fairly certain that this exquisite tool designed to enrich our writing, something wonderful within modern technology, has never been used by any of my children. They haven't had enough reasons to take advantage of its ability to help them express themselves more clearly.

The ease with which our fingers tap away, causing an outpouring of words without limits, may have something to do with the petrifaction of language expressed by our youth. There is no question that language usage has been altered by the advent of chats and texting, in fact there was a flood of interest in the topic within the press a few years back. The results were clear: text messaging "stunts writing skills," "aims at getting as much said with as few words as possible," "is not suitable in formal or classroom writing." Students make "countless syntax, subject-verb agreement and spelling mistakes in writing assignments" and "don't want to be bothered with the writing process-drafting, revising and editing." As an occasional editor I’ve plowed through my portion of poorly written papers. While enjoying the challenge almost as much as I did the weekly Times crossword puzzle way back when, I'm horrified by students' overall weak command of language. The extremely limited range of their expression, probably an indication of equally inadequate oral communication skills, may be one of the biggest educational failures of this generation.
The introduction of computers into the classroom, despite the litany of serious issues raised over the past few years, has effectively driven a nail in the coffin for the maintenance of any real “style” to writing. With it the well-publicized concern over the effect of all of this technology on writing skills has relatively disappeared. Ironically, considering my own concerns, my eldest child is petitioning for permission to use a laptop full-time in the classroom. His reasoning, supported by an official psycho-didactic evaluation, is that his cramped hand keeps him from recording the material presented in an efficient manner. Alternatively, his lightening fast typing skills--developed just how?-- will enable him to better record the important information relayed by his teachers. Despite the reality that in a few short years he'll be like every college student, opening their laptops and typing away as the lecturer speaks, my gut instinct is to delay this transfer of means.

There is something intrinsically important in holding the pencil, in making the effort to scribble something legible, whether meaningful or not, in a notebook. I worry that without this step the focus on the subject at hand, as well as its retention and digestion, might get lost. In addition, how can one dismiss the significance of that age-old experience of scribbling a brilliant idea in the margin of a notebook, perhaps accompanied by a tiny little light bulb! As one brilliant Columbia University graduate recently blogged, "I usually just keep some paper next to me in case I have to think, because I doodle when I think." 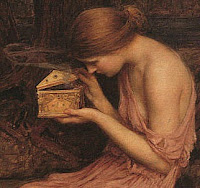 When it comes to writing, there are absolutely no short-cuts. Although I could somehow live without that adrenaline-stimulating annual trip to the stationery store in preparation for the school year, a personal journey I've traveled from Chestnut Hill to Or Akiva, I maintain that this transfer of means, from the pencil to the keyboard, will do nothing to encourage my children's writing skills. Strunk and White's dicta that "vigorous writing is concise" and that "when a sentence is made stronger, it usually becomes shorter," were not meant to encourage the exclusion of punctuation and vowels or the ignorance of basic grammatical structure! The gift of using words to express exactly what one wishes to say is buried somewhere behind that screen. This next generation will have to make a gargantuan effort to find the good amongst the multiple evils released, somewhat like Pandora.
Posted by Caroline Goldberg Igra at 3:45 PM